In 2014, Rootz Underground, Solomonic Sound and Worship Recordings teamed up to release the 4th edition of our Selectors Choice series. Loaded with over an hour of material, each track included on the mixtape is either an exclusive dubplate or an original production by Solomonic Sound. 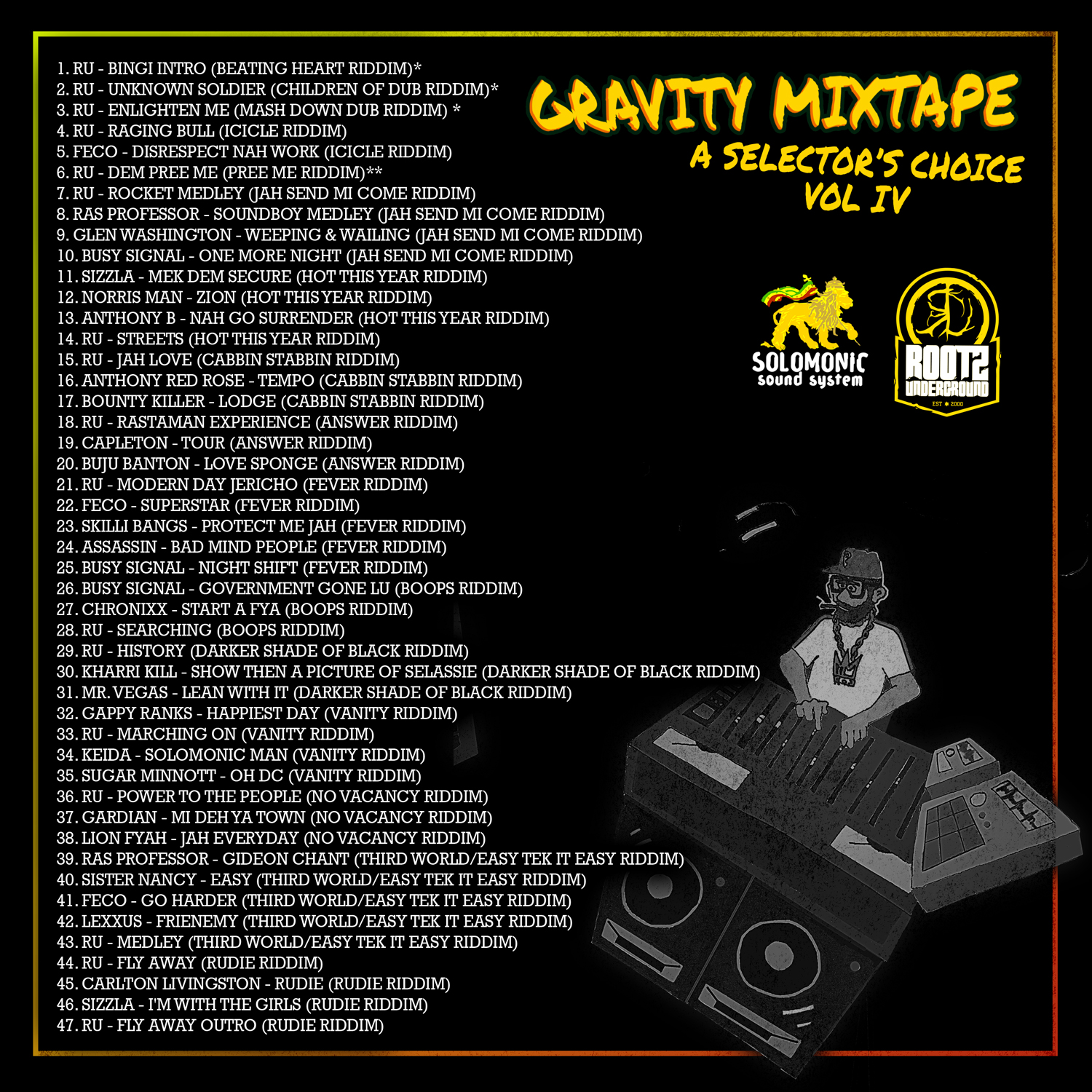 The purpose of The Gravity Mixtape is to take listeners on a virtual sound tour of the nightlife in Kingston, Jamaica. It is also a reverse chronological exploration of the numerous genres that have stemmed from reggae music. Beginning in Rob Paine presents A Selector's Choice Vol.4 Gravity MixTapethe present with a house remix of the Rootz Underground song “Unknown Soldier,” The Gravity Mixtape weaves it’s way back all the way in time, finally landing at the ska riddim from “Rudy, A Message To You.” Along the way, Solomonic Sound mixes in splashes of hip hop, dubstep, and digital reggae. Included alongside the reworked tracks from Rootz Underground’s 2010 album Gravity, are the sounds of Buju Banton, Capleton, Chronixx, Sizzla, Busy Signal and plenty of others.

Lead singer of Rootz Underground, Stevie Lightning refers to The Gravity Mixtape as “a soulful time-transcending journey through the music scape of the underground from the perspective of the capital city of Jamaica; Kingston.” He also added, “It is a blend of several of our great artistic minds of the time and how they express and interpret what is going on through this power house of a medium known as reggae music!”

Rootz Underground is a 6-piece band from Kingston, Jamaica led by Stevie “Lightning” Newland. The band has gained international recognition from their energetic live performances, and their three studio albums, Movement (2008), Gravity (2010), and Return of the Righteous (2015). Clever and conscious verses are the staple of their sound, in addition to a special brand of roots-rock fusion.

The Gravity Mixtape was produced and mixed in its entirety by Rob Paine. Paine founded Worship Recordings in 1998, and soon after formed the Philly-based sound system Solomonic Sound. With a passion for roots and dancehall reggae, and an affinity for combining modern and classic sounds, Solomonic Sound matched perfectly with Rootz Underground to provide a fresh take on their 2010 album, Gravity.

review from The Pier

Connect with us on Social Media!